Puerto Rico’s main industry is tourism — it’s the ideal destination for people from the East Coast of the US looking to head south for some winter sun.

I caught up with Rob Villacres — the owner of Coqui del Mar, a gay guesthouse in San Juan — to see how the island’s tourism industry is recovering.

Were you on Puerto Rico when Hurricane Maria hit?

I wasn’t, but I was on the phone with our manager. I was able to speak with our maintenance manager via WhatsApp and our general manager via phone. I watched some of the hurricane damage almost live — they would film and send it to me.

Was your guesthouse damaged by the hurricane?

We had very minimal flooding and some other damage. The repairs cost us $10,000 — a tin roof, some sun canopies, and general cleanup — but the insurance only reimbursed us $1,000. However, we feel very lucky.

Did the surrounding neighbourhood suffer much damage?

There were some palm trees that fell down, and some hit houses and did some damage — both to houses and electrical lines. The worst damage close to us was in some parts of Ocean Park that heavily flooded — entire properties were under water. There were guesthouses in that area that were closed for weeks, or longer.

How long did it take for power and water to be restored to your neighbourhood?

All of Puerto Rico lost electricity and water. For us, water came back within two days. We have cisterns with 1,800 gallons of water, so we weren’t affected by the water shut-off. In terms of electricity, we have a full house generator but the problem was buying the gas for the generator — logistics in Puerto Rico were complicated.

We had to limit electricity use to two hours per day — people were very happy with this, as it was two hours more than most of Puerto Rico had. After about two weeks of operating like this, we were able to get the gas tanks we needed and run electricity as we needed.

Now we have additional stockpiles of gas bottles for the next hurricane — hopefully that won’t be any time soon. We also have plans for a solar roof and battery back-up system.

Electricity for the island came back on Thanksgiving day — two months after the storm.

Did you have any guests staying in the guesthouse when the hurricane hit?

Were your bookings impacted by the hurricane?

We did have a lot of cancellations. Especially after Irma — the first Hurricane that impacted Puerto Rico. Maria arrived a little over a week later. Things were just getting back to normal.

For the first few days after the hurricane, we were still full as the airport was closed and no one could leave. When our guests did get to go back home, we were near empty for a few nights. Then came all the repair technicians, insurance adjusters, Army personnel, and FEMA. We ended up volunteering our hotel as a FEMA temporary shelter, and we’ve been full with Puerto Rican families that lost everything during the storm. FEMA is helping these guests get their homes back to liveable condition while they stay with us.

Tourism is such a major industry for Puerto Rico, what sort of impact has the hurricane had on tourism?

Tourism was dead after the storm. Then when the emergency personnel started to arrive, the first things that really got busy was any place with internet and any restaurants. There weren’t many places open. We’d share information via Facebook as to where you could find internet, food, water, or gasoline. It was surreal.

Currently, things are still slower than normal. The activities like tours, jetskis, and other fun things definitely slowed down. Many staying in hotels now are here for work, so they’ll visit restaurants, but not so much the typical tourist things.

The reports that we saw suggested that Puerto Rico’s infrastructure had been severely damaged and would take a long time to recover. Is that your experience and perception?

Puerto Rico’s infrastructure was destroyed. We’re in the capital, and there were roads closed for weeks due to flooding and power-lines — imagine what it was like in the smaller cities and in the mountains. Puerto Rico really should have used this time to switch to localised energy sources, such as solar, that wouldn’t shut down the entire island if one plant was affected. Unfortunately, US laws required repairing the same existing system, and that’s what was done. My fear is that the next hurricane will leave Puerto Rico in a similar situation.

Are you aware of any specific impact on gay venues in Puerto Rico, or the gay scene on the island in general?

I had a few gay friends leave the island. I think in general, the gay scene was subdued due to the hurricane. Gay Pride this year — 3 June — should be really good. We’re planning a Winter Pride this year as well for the first time.

Are tourists starting to return to Puerto Rico?

Tourists are coming. Some never stopped coming. Even when we were running on a power plant, there were some tourists that still kept their bookings and dealt with the inconveniences. Now we’re definitely getting interest again.

In terms of forward bookings, it’s a little slower than normal, but not significantly. I think there are some hotels that are still under repair, so even though there might be less tourists, there are also less hotels, so it all evens out.

What can people around the world do to help Puerto Rico get back on its feet?

The best thing is to come visit. Stay and enjoy. Go out, go to restaurants, to clubs, and have fun. The locals people want their life back, including working and earning a living. Donations are great, and definitely, when you come, do bring used clothing, solar powered lights, or solar radios to donate. But the most important is to come and enjoy Puerto Rico as a tourist.

It’s also a great time to come and live in Puerto Rico. The tax benefits in Puerto Rico are like nowhere on earth, and home prices have never been lower. Puerto Rico has its problems, but it’s known as the Enchanted Island for a reason. It is magical.

Although situated just a short jump from Cuba, Puerto Rico is a territory of the United States — the currency is US dollars, the time zone is almost the same as New York, most people speak English — or Spanish is the local language — and all of the big American food and retail chains are well represented.

But Puerto Rico is a lot more than just a warmer version of the US — it offers visitors a unique combination of sandy beaches, rugged landscapes, and Latino living that makes for a pretty spectacular vacation destination.

Increasingly, Puerto Rico is also becoming a popular destination for European travellers looking for a sunny destination as a mid-winter break — direct flights to San Juan make it a fairly painless eight-hour journey.

Sunday is beach day for the locals of San Juan, but if you’re on vacation then you’ll find it tempting to spend every day that you can enjoying the golden sand, warm water, and gentle rolling waves.

There are no restrictions on drinking in public or at the beaches — although public drunkenness is frowned upon — so most people bring their own supplies, but there are also beach vendors hawking cerveza and agua. The helados — ice-cream — vendors also do a brisk trade, pushing their carts up and down the beach, ringing a small bell to attract attention if things get a bit quiet.

There’s not really a gay beach as such — Ocean Park has a good smattering of gay guys. The other place to go is Atlantic Beach which apparently has a bit of a higher gay density on a Sundays and you can finish the day with cocktails at beach-side bar Oceano. Other popular gay venues are SX, and Circo Bar.

Isla Verde is a more touristy beach, and it’s also probably the best beach. It’s lined by hotels and high-end apartments, but even if you’re not staying beach-side you can access from a number of points.

Swimwear-wise, all the guys — even the gays — seem to wear long board-shorts.

If you’re one of those people that needs more from your vacation than just solid beach time, then Puerto Rico has plenty to keep you busy. Paddle boards and jet skis can be hired locally and are a popular way to get out on the water. Kite surfing is possible from the main beaches of San Juan — especially Isla Verde — but if you want serious surf then head to the Rincon beaches on the west of the island. If you want scuba diving, there’s a number of dive operators — with Fajardo and Palmas Del Mar the best locations.

There’s a lot about Puerto Rico that feels very familiar, but occasionally you do come across some surprises — little quirks that you may not have been expecting. For example, you can watch cock fighting in Puerto Rico, you might run into a beach-side Argentine Tango class, or you might learn to love Mofongo — a local speciality which is a side-dish of green mashed plantain.

Vieques is a small island just off the coast of Puerto Rico’s main island. This is the island where you’ll find Mosquito Bay — the world’s brightest bioluminescent bay, a phenomenon created by light-producing organisms that live in the water. Time your visit with the new moon when the luminosity is at its most spectacular.

Hix Island House is the place to stay — a luxurious retreat designed for minimal impact on the island’s environment and maximum comfort. This is the ideal place to escape the world. 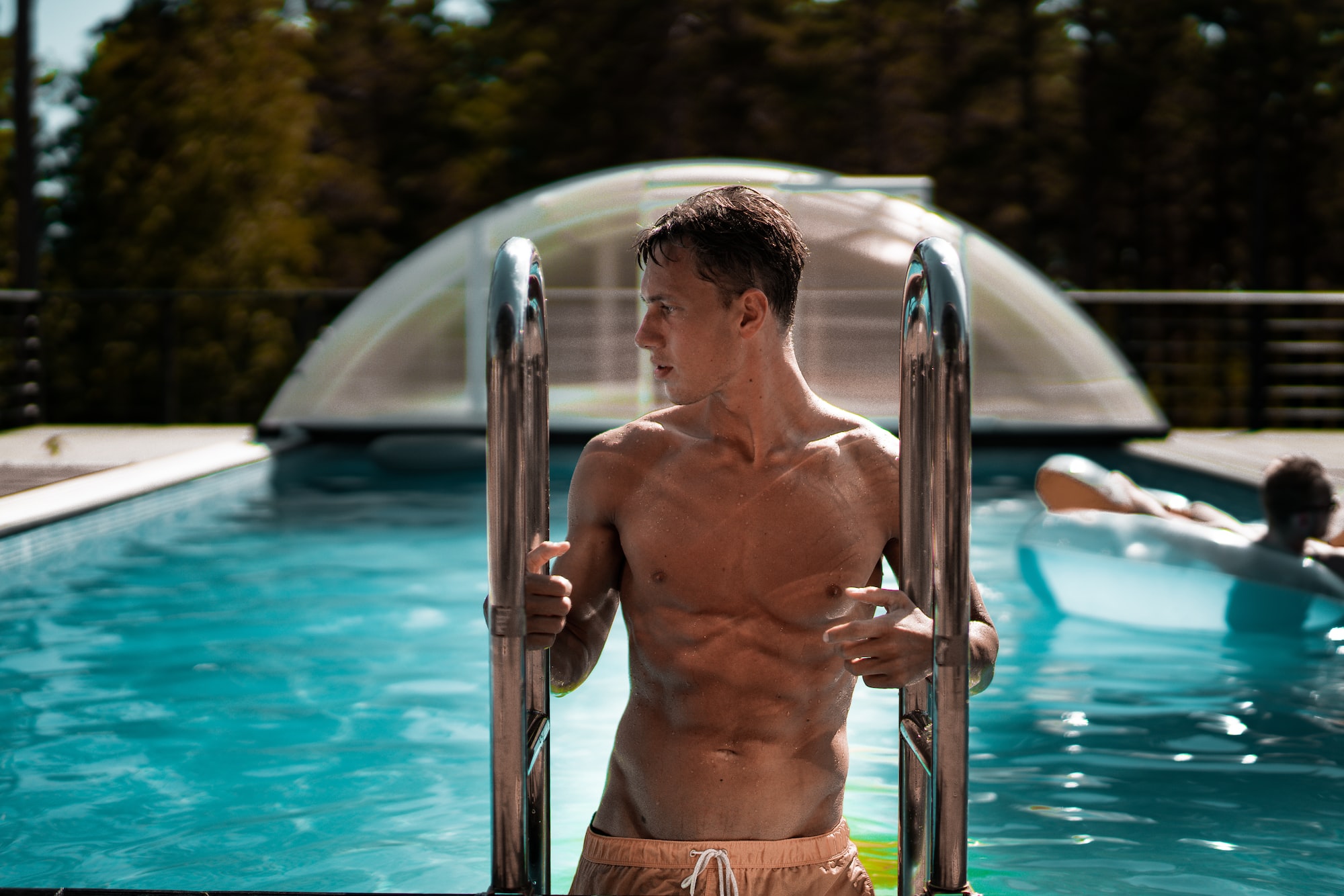 An unapologetic peek into the queer scene of Los Angeles.